The places of Rome: the Colosseum, a fascinating and perfect location for selfies and pictures

The floor of the Colosseum, where you could expect to see an ellipse of smooth sand, is instead an astonishing series of masonry walls in the shape of concentric rings, spirals and chambers, like an immense fingerprint. Confusion is increased as you descend the steps in the eastern side of the stadium and enter the ruins hidden under a wooden floor during the nearly five centuries when the arena was in use, beginning with its inauguration in 80 A.D.; capers and figs appear from the mosaic of travertine slabs, tuff blocks and bricks of the walls. The walls and the floor have numerous cracks, grooves and abrasions, some of them obviously made for purposes that can only be guessed.

The glory of Rome: the show of the Colosseum

What happened inside the Colosseum is a show that has nothing to envy to modern theatres and television programs. This is one of the reasons why the Colosseum has always been chosen for selfies and photos, and continues to fascinate tourists from all over the world. There are so many fun facts that refer to its history and above all to the function that this fantastic monument carried out. For example, the groove that creates space for the four arms of a vertical winch in the shape of a cross, called "winch", was pushed by men walking in circle.
The pole of the cathead is a wooden tambour or bell beam with a cable on it. The system laid on a hole and a team of workers raised a cage with a bear, a leopard or a lion inside. Everything was put just below the level of the arena to give a scenic effect of magnificent surprise. Taking selfies and photos in these wonderful places will ensure you many likes, as well as having an authentic photo. Today many people can imagine it for themselves. After a renovation project, the hypogeum was opened to the public. The hypogeum is an underground construction of historical and archaeological interest and, in the case of the Colosseum, it was also useful for extraordinary shows. Reconstructing the complex machine under the floor of the Colosseum, examining the skeletal remains of the hypogeum, all the creativity and precision of the system emerges, as well as its central role in the great shows of the imperial Rome.
For these and other reasons, the Colosseum certainly is the most suitable place to take souvenir photos, both outside and inside its walls. Its complexity and its extraordinary avant-garde are decidedly astonishing as they are terrifying, nothing more precise to describe the concept of the sublime. 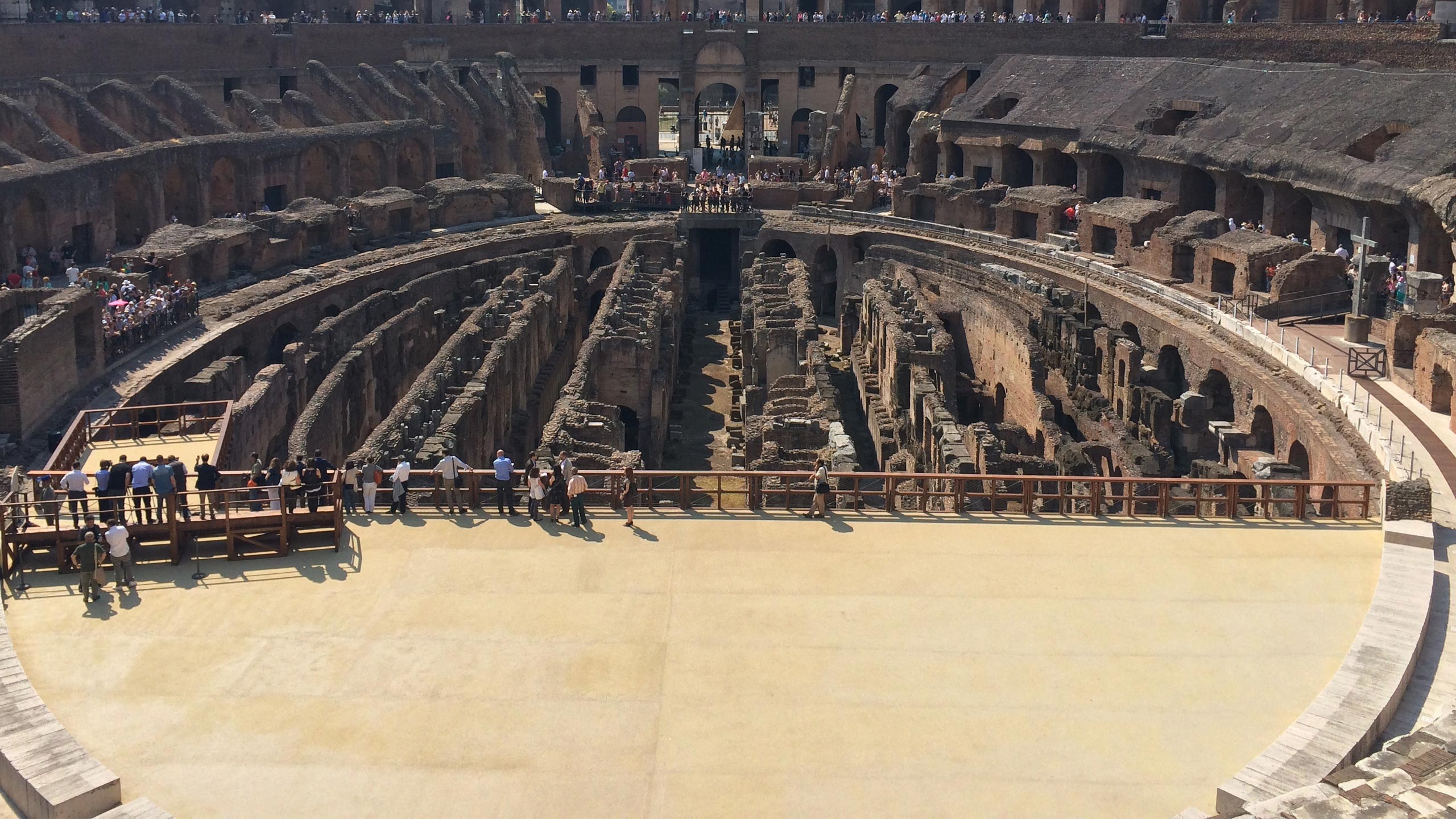 The history of the structural changes of the Colosseum: taking the best pictures

The technical disorder of the structure reflects around 1,500 years of random construction projects, layered or superimposed one after the other. After the last gladiatorial shows took place in the sixth century, the Romans extracted the stones from the Colosseum, which slowly succumbed to earthquakes and gravity. Through the centuries, people filled the hypogeum in of earth and debris, planted gardens, hay and animals' excrements. In the amphitheatre above, the enormous vaulted passages used to protect cobblers, metalworkers, priests, collectors and money changers, in addition to the Frangipane's fortress, lords of the twelfth century war. Local legends and pilgrim guides described the amphitheatre walls as a former temple of the sun. The necromancers went there to summon the demons by night. Taking photographs in this area full of myths and legends will be very evocative as well as creative, its structural archaeology is still clearly visible and continues to fascinate tourists and lovers of art history.
Towards the end of the sixteenth century, Pope Sixtus V, builder of Renaissance Rome, tried to transform the Colosseum into a wool factory, with workshops on the arena floor and in the upper districts. But due to the enormous cost, the project was abandoned after his death in 1590. In the years that followed, the Colosseum became a popular destination for botanists due to the variety of plant life that had taken root in the ruins. Already in 1643 the naturalists began to compile detailed catalogues of the flora, listing 337 different species. This element adds to the fantastic history of the Colosseum, enriching it with natural as well as cultural elements.
At the beginning of the 19th century, the floor of the hypogeum laid buried under about 40 feet of earth, and all the memory of its function - or even its existence - had been erased. In 1813 and 1874, the archaeological excavations that tried to reach it were hampered by the flooding of the aquifers. Finally, under the glorification of classical Rome by Benito Mussolini in the 1930s, the workers definitively freed the hypogeum from the earth.

Main phases and modifications of the Colosseum

Unveiling the intricate history of the site, the archaeologist Beste identified the main stages of construction and numerous modifications in nearly 400 years of continuous use. The Colosseum architects made some modifications to allow new methods of stagecraft. Other changes were accidental; a fire caused by lightning in 217 A.D. destroyed the stadium and huge blocks of travertine fell into the hypogeum like a rain of debris. Beste also studied the cranes used by the Romans to move large objects, such as marble blocks 18 metres high.
Applying his knowledge to eyewitness accounts of the Colosseum games, Beste was able to devote himself to some deductive reverse engineering techniques. The coupled vertical channels found in some walls, for example, probably looked like tracks to drive cages or other compartments between the hypogeum and the arena. He had been working on the site for about one year, before he realized that the distinct semi-circular slices in the walls near the vertical channels were probably there to create space for the revolving bars of large winches that triggered the raising and lowering of cages and platforms. At the peak of his operation, he concluded, the hypogeum contained 60 catheads, two floors high. Forty of these catheads raised animal cages throughout the arena, whereas the remaining 20 were used to lift scenarios sitting on 12-metres hinged platforms.