The culinary art of Rome: it's raining meatballs in Rome!!!

The meatball is one of the most popular dishes in the collective imagination, not only by Italians but throughout the world. These small balls of meat baked in the oven or fried can be prepared according to a thousand different recipes, however Rome is their birthplace. Here you are all you need to know about the meatball.

The history of the meatball

There are many peoples and nations competing for the invention of the meatball, a dish able of matching the tastes of adults and children. According to some, the meatball was created in Persia with the name of kofta, which means crushed meat.
When Persia was conquered by Greece, the conquerors "imported" this tradition to Magna Graecia by making it reach Europe. According to others, instead, the meatballs were created by Apicius, a cook by profession in Imperial Rome, who managed to conquer all with these small balls of meat cooked on the grill.
At the time, however, they certainly weren't called meatballs and this term appeared in a kitchen document in the 15th century for the first time, when the Libro de Arte Coquinaria - created by Maestro Martino da Como - used the term meatball.
The preparation of the meatball as everyone knows it now begins to be mentioned in the 1800s, when Artusi - in his famous "La Scienza in cucina e l'arte di mangiar bene" - told the process of preparing the meatball in a way very similar to the one currently used.
Finally, by the discovery of America by European navigators, the meatball arrives overseas and century after century it also conquers Native Americans until the creation of meat balls, the typical American meatballs dipped in tomato sauce.

The thousand meatballs of Rome

In the Roman and Lazio culinary tradition the meatballs are the queens of the table. It is a substantially poor dish made during the week with the leftovers of Sunday.
On the feast day, the roast was actually made and the meat often left over, as well as the boiled meat used to prepare the broth, and it was tasteless to be eaten as it was. For this reason, in the poorest families, where nothing was wasted, they invented a way to recover the leftovers.
The meat of the day, was minced and flavoured with stale bread, cheese and spices. The obtained spheres were cooked in tomato sauce to give more flavour and taste. Over time, however, the recipe for meatballs has undergone numerous variations and today in Rome you can enjoy meatballs of any kind, from vegetarian to fish.
Even the cooking methods vary a lot and it is not rare to find those who cook meatballs directly in the sauce, who fry them in seed or olive oil or who cooks them in the oven.
Whatever the recipe, however, the meatball is always a very popular dish that represents the Italian essence even abroad and it is a very balanced second course according to a nutritional point of view, and greedy for the palate. So you just need to find out which one is the type of meatball that best meets your palate. 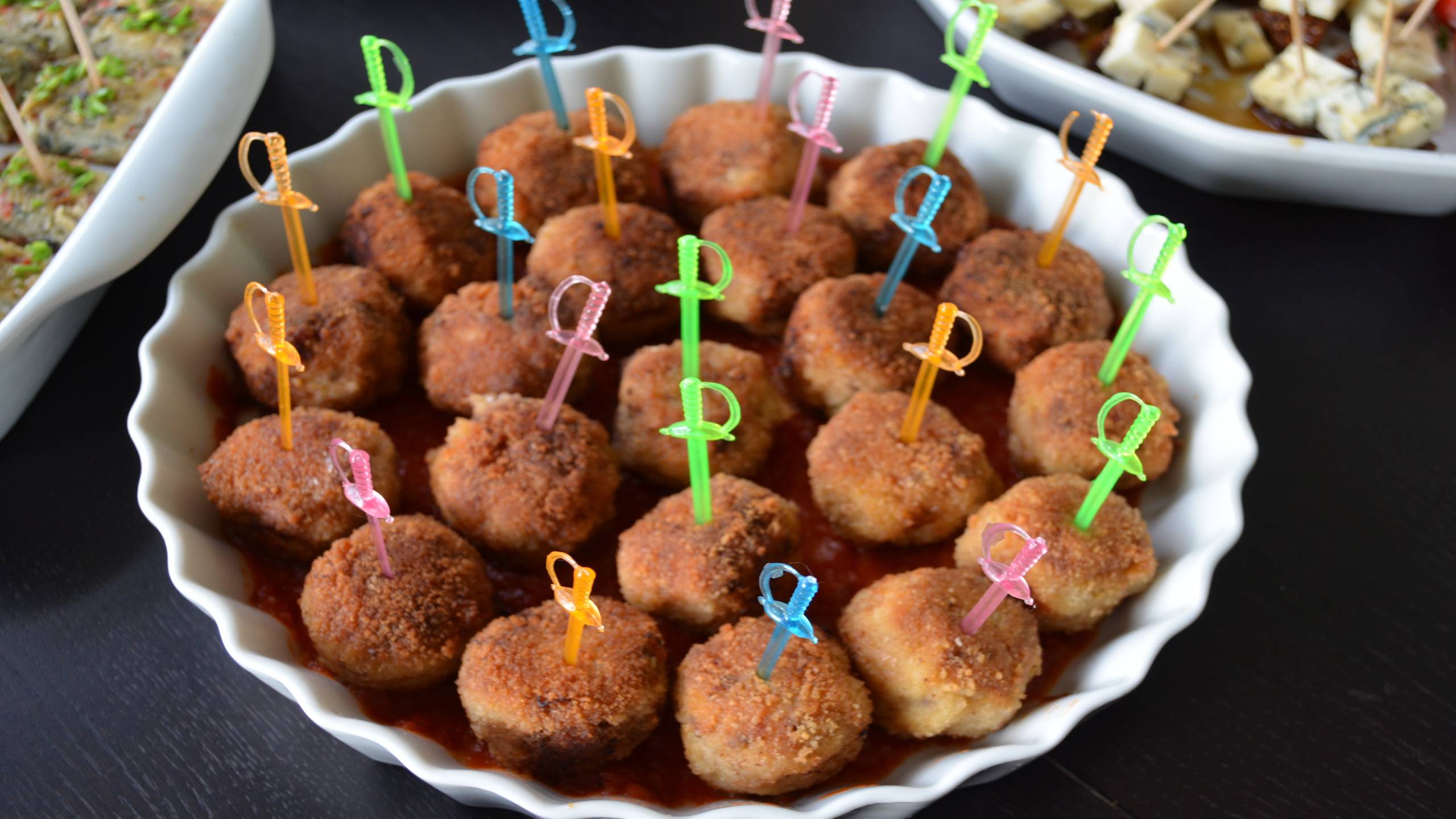 The meatball festival in Rome

The meatball is a dish so loved in Rome that it is on the menu of almost all the restaurants and restaurants of the Italian capital. But love for meatballs boasts you to do much more.
For some years, an entire event has actually been dedicated to these small spheres of meat. Every year, in the Egeria Park, the event that celebrates the beloved meatballs takes place: for three days, from dawn to dusk, savoury and sweet meatballs are made with every kind of ingredient, in a real culinary journey that leads from the creation of the first meatball to the most contemporary recipes.
A unique opportunity, therefore, not only to taste many different preparations but also to spend a tasteful day in the name of the famous dish, tasting every variation that may arise from the history of world gastronomy and the creativity of the event chefs.
Many booths stands offer you the opportunity to learn all the secrets of preparing meatballs so as to try to cook them at home, for your family and friends.
In addition to the festival dedicated to meatballs held once a year, however, this famous dish can be enjoyed in Rome at any time of year in the many trattorias that are located between Trastevere and Testaccio, two historical districts where you can still enjoy the real traditional Roman cuisine.
In recent years, then, some venues have come to light that serve as the only specialty the meatball, declined in every variant and made in every version, from the classic salted to the most innovative sweet one up to the very modern vegan meatball.

Where to stay in Rome to enjoy the meatballs

If after this excursus through the world of the Roman meatball you felt like organizing a trip to Rome to taste the most traditional recipes of this specialty, then you need to find the best structure to stay in the Capital so as to combine the culinary discovery with that of the many wonders that can be visited in the Eternal City.
The Hotel Colosseum Roma certainly is a reference name in this sense, offering all the comforts of a luxury hotel but for always very affordable prices. Located in the central Rione Monti, this charming hotel will allow you to easily move around the city and discover the several monuments it hides as it is near all the most important attractions of the city.
It is also very close to the most famous trattorias where you can taste the best meatballs in Rome, for lunch or dinner. Combining a good dish of meatballs with Roman sauce with a post-dinner walk while admiring the narrow streets of Rome will make your Roman vacation truly an unforgettable moment.