The art of Rome: San Pietro in Vincoli, the ancient Basilica, home of the Moses by Michelangelo

When you hear about Rome, this name carries with it a millenary history and numerous archaeological works scattered in the centre of the city and even a few kilometres from its beating heart. One of the examples of historical architecture that attracts more and more curious people, art lovers and tourists is the church of San Pietro in Vincoli. San Pietro in Vincoli is a Roman Catholic church and minor basilica of the Roman city, better known for being the home of the statue of the Moses by Michelangelo, part of the tomb of Pope Julius II. The "Titulus S. Petri ad Vincula" was awarded on November 20th 2010 to Donald Wuerl. The former Cardinal Priest of the basilica was Pío Laghi, who died on 11st January 2009. Next to the church, there is the Faculty of Engineering of La Sapienza University, in the building that is a former convent. This place is called “San Pietro in Vincoli” par excellence, located on the hill, just near the Cavour stop of the underground station, near the Colosseum.

The history of the church of San Pietro in Vincoli

One of the most fascinating features of this place certainly is its history. Also known as the Basilica Eudoxiana, it was rebuilt on old foundations between 432 and 440 to house the of St. Peter’s chains when he was imprisoned in Jerusalem; the episode took the title of "Liberation of St. Peter". Empress Eudossia - wife of Emperor Valentinian III - received the remains as a gift from her mother, Aelia Eudocia, wife of Valentinian II, who showed the chains to Pope Leo I. Aelia Eudocia had received these chains as a gift from Iuvenalis, bishop of Jerusalem. According to the legend, when Leo compared the chains to the last incarceration of San Pietro in the Mamertine Prison in Rome, they miraculously merged together. The chains are now kept in a reliquary under the main altar of the basilica.
The basilica was consecrated in 439 by Sixtus III and underwent several restorations, including that of Pope Adrian I, as well as further works in the eleventh century. From 1471 to 1503, when Pope Julius II was elected, Cardinal Della Rovere, nephew of Pope Sixtus IV, made a remarkable reconstruction bringing to light the primordial beauty of the church. The portico on the front side, attributed to Baccio Pontelli, was added in 1475. The cloister (1493-1503) was attributed to Giuliano da Sangallo. Further works were carried out at the beginning of the 18th century, by Francesco Fontana, and in 1875, there was also a restructuring. "Vinculis" means "chains" in Latin, and it refers to the miracle of St. Peter's chains. In 439, Elijah Eudocia, wife of the Eastern Roman emperor Theodosius II, made a pilgrimage to Jerusalem where he found several remains, including the chains used to tie St. Peter in that city; he sent them to his daughter Licinia Eudocia, who was the wife of the Western Roman emperor Valentinian III. At the end, the chains were given to Pope Leo I who decided to keep them together with those used to tie St Peter at the Mamertine Prison in Rome: the two sections spontaneously merged. San Pietro in Vinculis was built in 442, by Licinia Eudocia to celebrate the miracle and to host the chains, reason why it is also known as the Basilica Eudossiana.

The interior of the church of San Pietro in Vincoli

The interior of the basilica consists of three naves, with three apses separated by ancient Doric columns. The side aisles are surmounted by cross vaults, while they feature an eighteenth-century coffered ceiling, frescoed in the centre by Giovanni Battista Parodi, depicting the Miracle of the chains (1706). In this scene, Pope Alexander treats the neck of St Balbina who was about to choke, touching it with the chains that once tied St Peter. 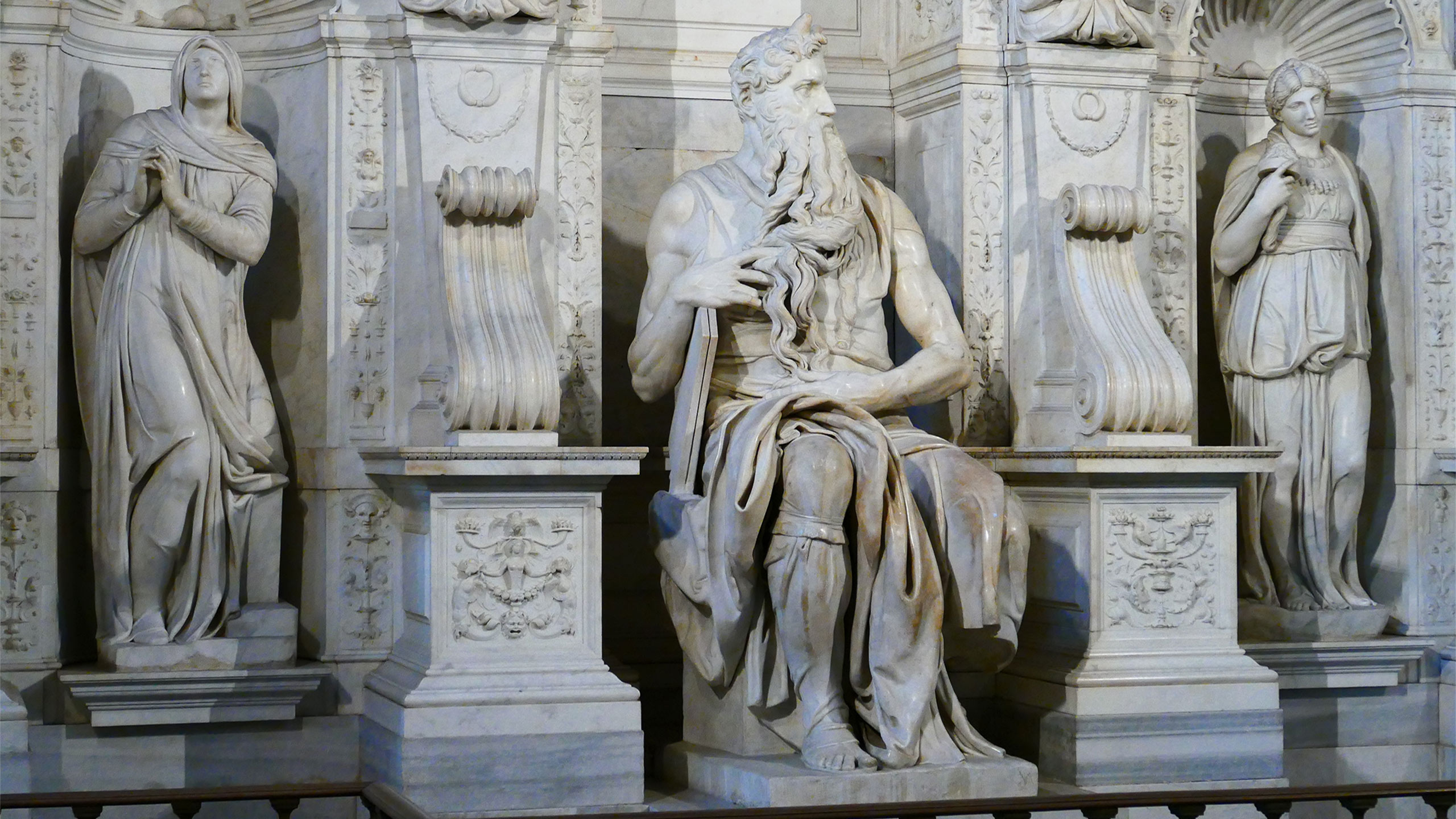 Michelangelo's Moses and other works

Michelangelo's Moses - completed in 1515 - was originally designed as part of an impressive funeral monument of 47 statues, for Pope Julius II, but it later became the focus of the funeral monument in this church. Moses is depicted with horns, a symbolic element that outlines the radiance of the Lord, his splendour. This symbol was used because of the similarity between the Jewish words of "beams of light" and "horns". This type of iconographic symbolism was common in the early sacred art, and it was easier to sculpt horns than rays of light.
Other works of art include two paintings by St Agostino and St Margherita del Guercino, the monument of Cardinal Girolamo Agucchi designed by Domenichino, who is also the painter of a fresco in the sacristy depicting the Liberation of St Peter (1604). The sceptre of the altar of the first chapel on the left is by Cristoforo Roncalli. The tomb of Cardinal Nicholas of Kues - 1464 A.D. - with his relief, represents cardinal Nicholas is by Andrea Bregno. The painter and sculptor Antonio Pollaiuolo is buried on the left side of the entrance. He was the Florentine sculptor who added the figures of Romulus and Remus to the sculpture of the Capitoline Wolf on the Campidoglio. The tomb of Cardinal Cinzio Passeri Aldobrandini, decorated with an allegorical skeletal representation of death, is located in the church. In 1876, archaeologists discovered the tombs of those who once believed to be the seven martyrs of the Maccabeus. It is highly unlikely these actually were the Jewish martyrs who offered their lives in Jerusalem. They are remembered every year on August 1st, the same day of the chains miracle. The third altar on the left aisle contains a seventh-century mosaic of St Sebastiano. This mosaic is linked to a plague in Pavia, in the north of Italy. The remains of Sebastiano were brought there to stop the plague of 680, and since it was believed he was born in Lombardy, an altar was built for his relics: a "San Pietro in Vincoli" in Pavia. As a symbol of the relationship subsequently strengthened between Pavia and Rome, an identical altar of Sebastiano was built in the Roman church with the same name, giving rise to a parallel cult of the saint in both the regions.