The art of Rome: Castel Sant'Angelo, for over a millennium, the witness of the Roman history

Castel Sant'Angelo is one of the most ancient and important historical monuments of Rome. Its built dates back to the first half of the second century A.D., by emperor Hadrian, who wanted also the Villa Adriana, preserved today in Tivoli (the ancient Tibur). Hadrian, one of the main characters of the first imperial age of Rome, wanted the built of Castel Sant'Angelo as his mausoleum. The works were directed by the architect Demetriano and ended a few years after the emperor's death, under the empire of Antoninus Pius (139 A.D.). Originally, the entire complex was surmounted by a quadriga made of bronze, with the emperor Hadrian as a protagonist. Today, only the head depicting Hadrian is visible, preserved in the Vatican Museums, at the Sala Rotonda. It is important to note that, unlike many other monuments built in the imperial age, Castel Sant'Angelo is among the very few to have resisted the millennial challenge of the time, acquiring that immortality many emperors, artists and writers have always desired.

From a mausoleum to a fort

As already mentioned, Castel Sant'Angelo originally was conceived as the mausoleum of Emperor Hadrian and his successors. And indeed, for the first three centuries of life, the construction desired by the famous emperor fulfilled this task. Some of the most important emperors of Rome were buried there. In addition to Hadrian himself, inside the mausoleum there were the remains of Marcus Aurelius and Septimius Severus, two characters very important for the first years of the Roman Empire, when the Eternal City reached its peak, to then live dark years due to the military anarchy and the split between the Western Roman Empire and the Eastern Roman Empire. The parts were assigned to the two sons of the emperor Theodosius: Arcadius and Honorius. The latter, in the first years of the fifth century A.D., transformed Castel Sant'Angelo from mausoleum to a fort, in order to defend the city from enemy incursions. At the beginning of 400 A.D., Castel Sant'Angelo became part of the area included within the Aurelian walls.
Subsequently, by the disappearance of the imperial aura, many Roman families contended for the possession of the castle. One of these, the Orsini family, built the precious Passetto di Borgo, thanks to which Castel Sant'Angelo was connected to the Vatican State. The built of the Passetto di Borgo was strongly desired by Pope Niccolò III, who belonged to the Orsini family indeed. Niccolò III was not the last pontiff to be interested interest in the former mausoleum of Emperor Hadrian.

Castel Sant'Angelo: residence of the pontiffs

In the following years, Castel Sant'Angelo became inextricably linked to the pontiffs. Niccolo III was followed by Urban V, who literally took possession of the keys of the castle. From the second half of the 1300s, Castel Sant'Angelo became the residence of the popes alternative to the Vatican Palace, playing an important role in the return of the Curia to the capital after the forced exile imposed by the events of Avignon. Shortly later, the castle opened to art, after that wars, convictions and detentions had prevailed in the previous centuries. In the meantime, new forms were designed, new lights, within an illuminated design/path, which opened the doors to the Renaissance. 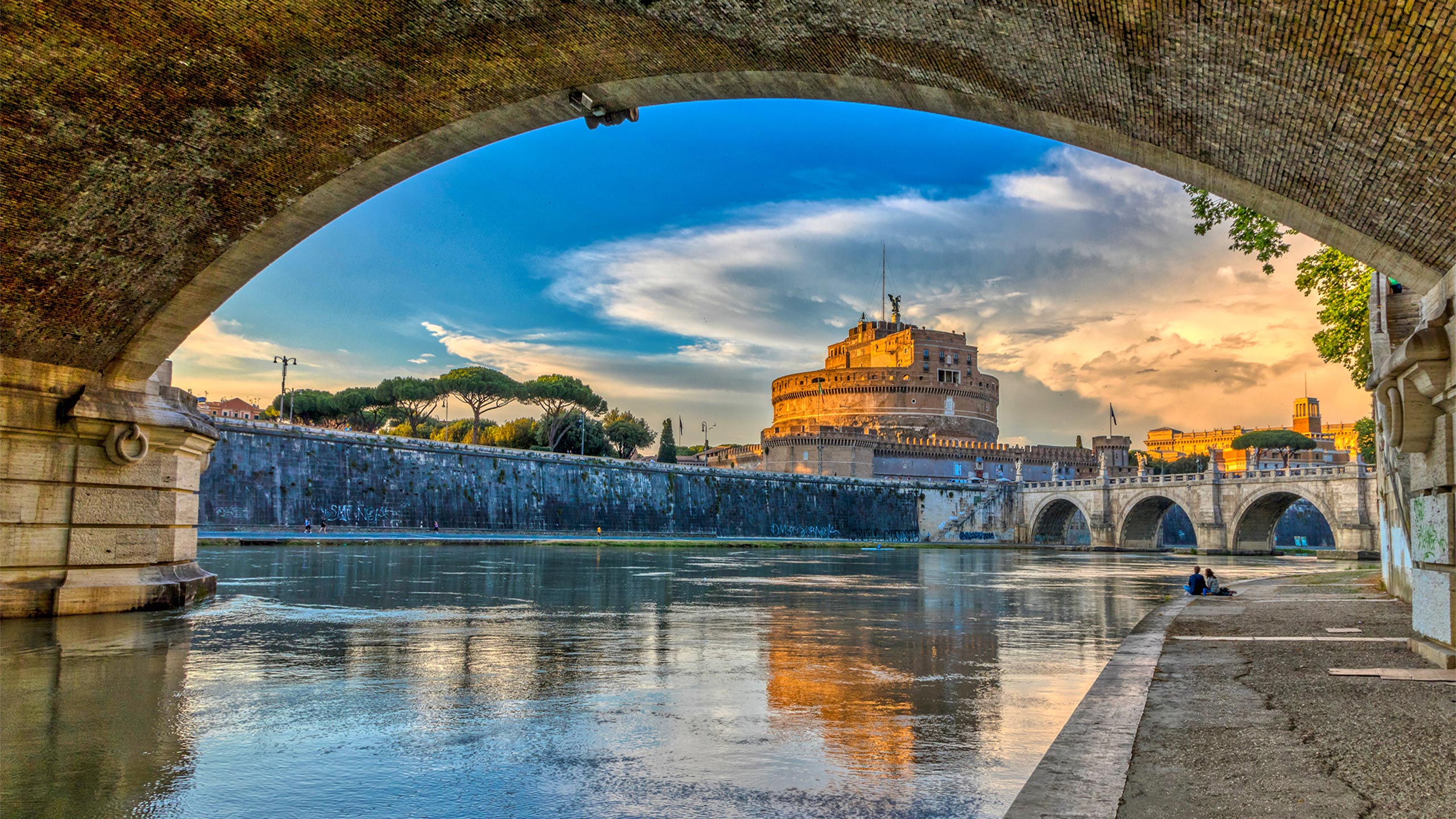 Castel Sant'Angelo, from the Renaissance to the dark years

During its millenary history, Castel Sant'Angelo knew not only emperors, corrupt soldiers and popes, but its destiny also crossed artists whose fame became legendary. Michelangelo is the most important, entrusted with the built of the side façade of the Santissimi Cosma e Damiano chapel, in the Court of the Angel, once called the Courtyard of Honour. Also during the Renaissance, Castel Sant'Angelo saw the completion of one of the works that most identified with it: the already mentioned Passetto di Borgo, thanks to which the building was connected to the Vatican Palace, official residence of the pontiffs.
Finally, during the Renaissance, intense works took place inside the castle, to improve the numerous papal lodgings inside the building. The leader was Giuliano da Sangallo, one of the best architects after Brunelleschi and Alberti. The fifteenth-sixteenth century was the period of maximum splendour of Castel Sant'Angelo, whereas between the late nineteenth and early twentieth century, the Mausoleum of Hadrian fell into disgrace, moved into a military prison, barrack and warehouse for armaments. Until the moment when, thanks to the action of Mariano Borgatti, a well-known Italian military in the early twentieth century, Castel Sant'Angelo acquired a new appearance.

1911 was the year when the first exhibition took place in Castel Sant'Angelo, directly set up by the military Mariano Borgatti, in occasion of the first 50 years of the Unification of Italy. Today, the National Museum of Castel Sant'Angelo, managed by the Polo Museale del Lazio, is kept inside the Hadrian's Mausoleum. The whole ticket costs of 14 euros, the reduced one costs 7 euros. The castle is open to the public every day, from 9 am to 7.30 pm. Over the past two years, the museum has hosted about two million visitors from all over the world.

How to get to Castel Sant'Angelo

Castel Sant'Angelo is situated along Lungotevere Castello, less than 10 minutes’ walk from St. Peter's Basilica and the Vatican Museums. The Mausoleum of Hadrian can be easily reached by the underground (Lepanto, line A, the nearest underground station) or by bus getting off at Piazza Pia stop (lines 23, 34, 40 and 62).