The city of Rome, in addition to its richness in monuments and history, also is a magical place where mystery and intrigue tell you thousands of fascinating stories. Rome is the background of mystery stories in novels of any kind, such as the Da Vinci Code by Dan Brown. Among the most interesting mysteries of the city, there certainly is the mysterious door of the Esquiline, located in Piazza Vittorio.

The history of the Esquiline mysterious door in Piazza Vittorio

The Esquiline mysterious door was one of the five doors that delimited the garden of Villa Palombara, the residence of Massimiliano Savelli of the family Palombara, marquis of Pietraforte, built in 1680 and today it is situated in Piazza Vittorio. Little is known about the Marquis except that he lived a very lonely life as a lover of mystery, considered dangerous and demonic at the time. The story tells in his residence, built on the Esquiline mountain just to be away from prying eyes, he spent his days in obscure experiments, probably looking for the formula to transform matter into gold or, according to others, trying to discover the elixir of long life. In questi suoi esperimenti molto spesso era accompagnato dall'amico Francesco Giuseppe Borri, noto alchimista dell'epoca. Longtime friend of the Marquis, Borri spent all his youth travelling around Europe following the most famous alchemists of the time; once back to Italy, he was accused of witchcraft and therefore imprisoned in Castel Sant'Angelo; in 1678, he was granted semi-liberty by the Pope as long as he remained in Roman territory. So he obviously asked the old Marquis of Palombara for hospitality in his Esquiline residence where, sheltered from prying eyes and the tentacles of the Inquisition, he was able to continue his alchemical experiments until 1691 when, after an anonymous information, he was again accused of witchcraft and imprisoned in the jail where he died in 1695. 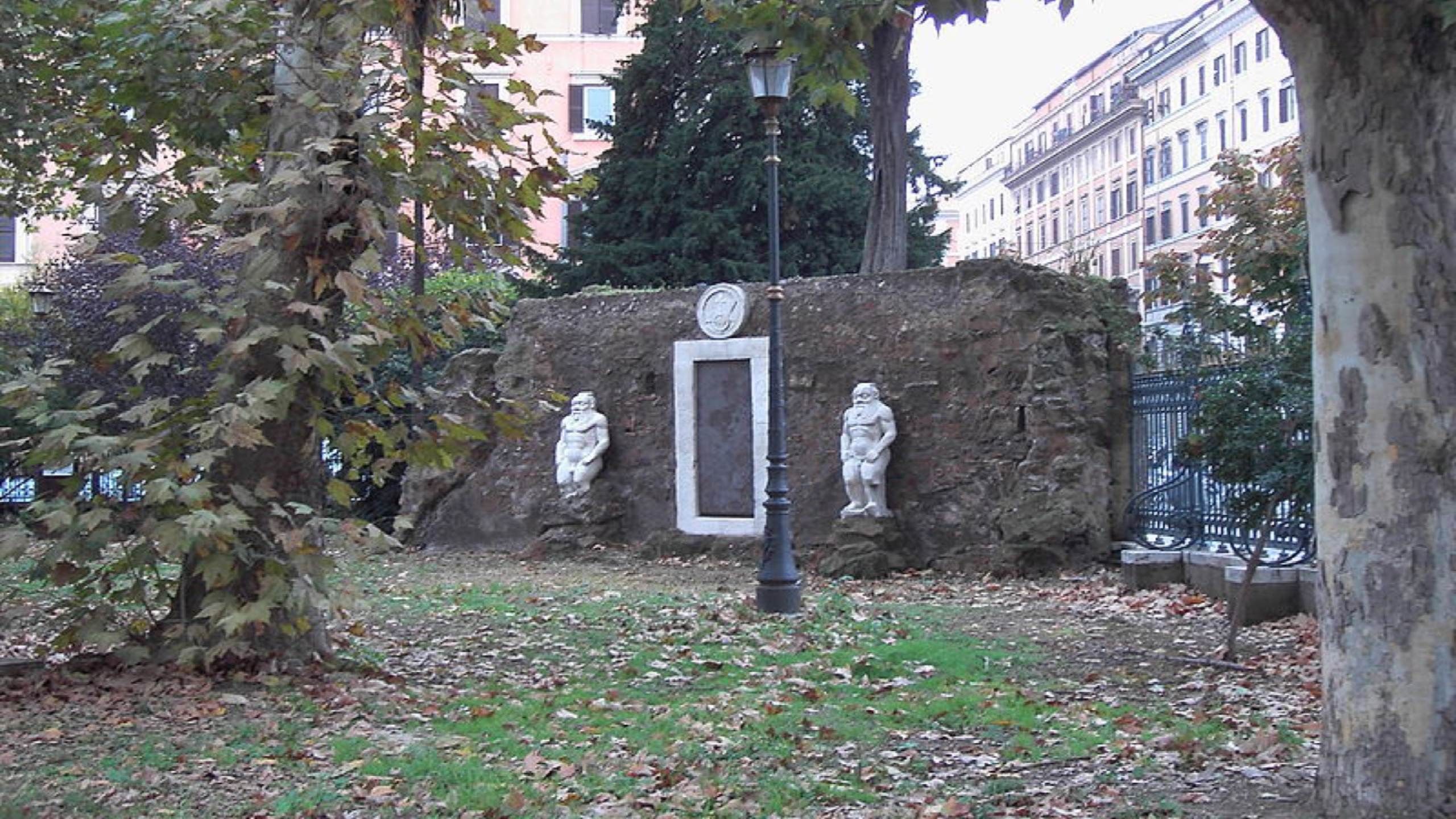 According to the legend reported by Francesco Girolamo Cancellieri - a scholar who made a paper on the mysteries of the city, in 1802 - Borri, pretending to be a pilgrim, was hosted in the residence of Palombara during a stormy night. He spent all the night in the gardens, looking for a mysterious plant that could transform matter into gold. At dawn, the servants went out into the garden looking for the disappeared pilgrim. Some witnesses vowed to have seen him crossing the threshold of the alchemical door and then disappear into nothing. On the threshold of the door, however, gold flakes were found and a sheet on which magical symbols of difficult interpretation were imprinted. The Marquis Palombara tried for years to interpret those symbols that contained the secret of the philosopher's stone without any success. He therefore decided stamp those symbols on the alchemical door so that anyone could try to interpret them. More recent interpretations link the symbols of the alchemical door to the Voynich manuscript, a document included in the collection of the alchemical texts belonging to King Rudolph II, sovereign of Bohemia. These documents passed from hand to hand until arriving at Athanasius Kircher, who had been one of Borri's teachers during his years at the Jesuit school.

Whatever the origin of the symbols found on the alchemical door of the Esquiline in Rome, it is very interesting to try to interpret its meaning. These certainly are classic illustrations part of the iconography of esoteric philosophy and alchemy, typical subjects of the seventeenth century. The design impressed in the central rosette, for example, the one representing the triangles surmounted by an inscription in Latin, already appears in a writing of 1621 by Henricus Madatanus entitled Aureum Seculum Redivivum. The symbols imprinted on the cross inside an inverted triangle, contained in a circle, actually represent sun and gold. Also other symbols contained along the arch of the door recall the meaning of gold and preciousness, and there is no lack of references to ancient Egypt, very important for the alchemy of the seventeenth century, since the Egyptians were considered the guardians of the art of the transformation of the raw material into precious gold. On the left door, instead, there are the symbols of the planets of the universe, with explicit reference to the elements every planet represents in nature. As for the different writings found on the door, they are all in Latin and refer to different episodes of mythology. For example, one of them refers to the history of Jason and the golden fleece the Argonauts' hero would have found by crossing the alchemical door.

The Esquiline mysterious door in Piazza Vittorio certainly is a monument not to be missed during a visit to Rome if you are fan of esotericism and magic. It surely is not the only important attraction in the Capital and, for this reason, we suggest you to plan a stay of a few days so as not to miss anything. To make it easier for you to visit the city, it can certainly be useful to choose a hotel that allows you to move easily from one point of Rome to another. The Hotel Colosseum may be the ideal choice as it is located in a strategic position, in the heart of Monti district, historical center, one of the most fascinating places in Rome. From there, it will be very easy to reach not only the alchemical door of the Esquiline in Piazza Vittorio but also all the other places, walking or using public transport. The hotel, then, will welcome you in the best way for moments of relax, in comfortable rooms and thanks to many additional services to let you fully enjoy your holiday in Rome. Finally, the staff of this boutique hotel is always available to offer you the best advice on the must-see attractions in and around Rome.