Secret Rome: the famous people hidden by Michelangelo in the Last Judgment in the Sistine Chapel

Visitors have always got astonished in front of the ceiling of the Sistine Chapel for over five hundred years. This masterpiece attracts millions of tourists every year and holds a special place in the heart of those who are faithful to Christianity but also lovers of art. In addition to serving as the Pope's private chapel, it is also the place where the papal enclave takes place, when the pontiff dies, and it is necessary to elect a new one. The last enclave was in 2013. This is just one of the pieces of the puzzle the secret Rome reveals to its guests; there are numerous famous people hidden by Michelangelo in the Last Judgment of the Sistine Chapel.

Sistine Chapel: a work by Michelangelo

At the age of 33, Michelangelo Buonarroti started the project. It was 1508, and the works ended in 1512, he painted mostly standing up, not on his back, as it is said. Turning the neck for long hours caused him terrible headaches, spasms and muscle cramps. A bloom of mold made him loose the first draft, so that he scraped the entire ceiling and started again from the beginning. The great master even had to create a system of scaffolding and special platforms to allow him to complete the work.
Michelangelo was already a famous sculptor; the David and the Pietà caused strong waves of astonishment throughout Europe, so that the consequent fame earned him the commission by Pope Julius II, although he considered himself a sculptor and did not take painting seriously. This master of human anatomy finally sculpted his figures on the ceiling of the chapel.
As he didn't have an initial, the size and the intricate details of the final work are just spectacular. The surface area of 1,100 square metres includes nine scenes from the Old Testament and over 300 living figures. Their portraits and natural anatomy are said to have inspired generations of artists and scientists. The panel "The creation of Adam", where the fingers of God and Adam almost touch themselves, is one of the most reproduced works in human history.

The secret characters hidden by Michelangelo

Even though it was Renaissance, the church was extremely severe, and the incursion of the authorities could be dangerous for the life and freedom of the sculptor. This is why it is so fascinating to think that one of the greatest artists in history has hidden secret images in his most famous work. It looks something like a Dan Brown novel. Think about "The creation of Adam": in 1990, the physician Frank Lynn Meshberger discovered something, a hidden brain in the figure of God where the clothes of the angels are intertwined. It is believed that it means God's intelligence left to humanity. It is also said that the cloud behind God is shaped like a brain, and that's not all. One of the angel's feet has two cracks like a horse. But Dr. Meshberger believes if you look closer, you will see the double lobes of the hypophysis.
In 2000, a nephrologist found a kidney hidden in another panel: it is a reasonable theory as the artist did suffered kidney stones.
An investigation from 2010 discovered another brain in the panel "The Separation of Light from Darkness", under God's chin, on the neck. The brainstem, the parts of the temporal lobe, the medulla oblongata and other parts are clearly visible. This part of the body is actually smooth, reason why it is outside. The study by medical illustrator Ian Suk and neurosurgeon Dr. Rafael J. Tamargo was published in the Neurosurgery journal. The use of light and God's short beard (usually depicted as long and flowing) added considerable importance to the issue, although some scholars remain doubtful. The beard hair even curls upwards to reveal the underlying image. 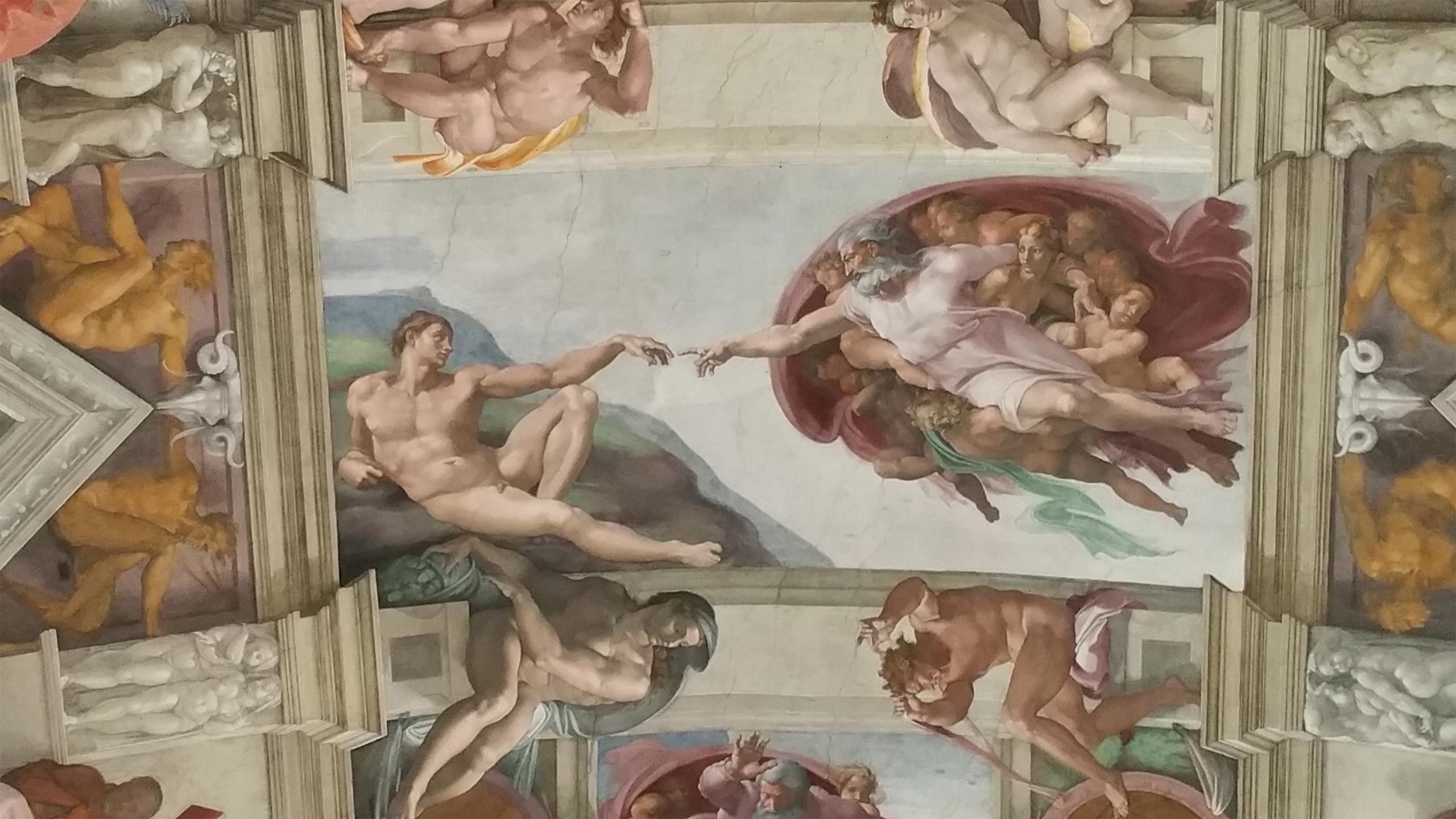 The anatomical perfection of bodies in Michelangelo's work

The prodigious Michelangelo, since his adolescence, was known to dissect and study the corpses in the church cemetery, reason why his sculptures were so similar to life. The fact of having mastered the representation of human anatomy brings out the swelling of the neck of God: it is an unusual view of the brain stem, from the bottom upwards. Most people would not recognize it unless they have studied extensively neuroanatomy (says Suk).
In the same panel, God wears a red robe. The optic nerves are portrayed in the twists of his dress, around the waist, in the same way it is in an illustration by Da Vinci of 1487. The two men were contemporaries and they were strictly connected in some ways. Look carefully, and you will notice a peculiar structure in his chest. Another unnatural roll of tissue is the figure of a human spinal cord, according to Suk and Tamargo. It seems the central nervous system may have been a too good reason to be used once, said Tamargo.

The female anatomy hidden in the Last Judgment

A 2016 Brazilian study published by the journal Clinical Anatomy, found that, in addition to internal organs, the artist may have also adorned the work by female anatomical structures. A ram's skull very similar to an uterus appears eight times throughout the painting. Women are painted as muscular to show female strength. However, art historians answer he only studied male corpses, but also claim the eight triangles all pointing down symbolize the female anatomy and, in this way, they allude to the holy feminine. This was a reason held in great consideration by Greek-Roman art, but which threatened the dominant-male approach of the Church. Women also take the scene in some paintings, some representations are considered a way to honour the female world.
Was the use of hidden symbols almost criticized and kidding the church a tribute to science to glorify human mind, a recognition of the divine feminine or other cryptic meanings? The interpretations will develop in a spiral for the years to come. One wonders if we will ever discover the mysteries behind these hidden organs or if the answers have been lost among the cavernous jaws of historical oblivion.