Water and fountains have always been a very important symbol for the city and have played a fundamental role in the artistic and cultural heritage of Rome. Considering the most famous and the unknown ones, the capital has a very high number of fountains and seeing them all is almost impossible, especially if you also consider those hidden in the gardens of the palaces.
In the imagination of the typical tourist who visits Rome for the first time, in addition to the Colosseum, St. Peter's and the Altare della Patria, there certainly is the Trevi Fountain, the most important and well-known architectural work of this type, representing a fundamental historical monument for the city, attracting thousands of tourists every year. You can therefore admire the beauty of this work created by Salvi, but the legend or popular tradition of launching coins to express a desire or to return to the capital in the future continues to be cultivated.
In addition to the Trevi Fountain, Rome hosts a series of fountains known or less worthy of visit and that you should absolutely discover during a stay in the capital. Usually the journey to discover these works is not very conventional, especially if at the first visit to the city but it is fundamental to discover the character of Rome. 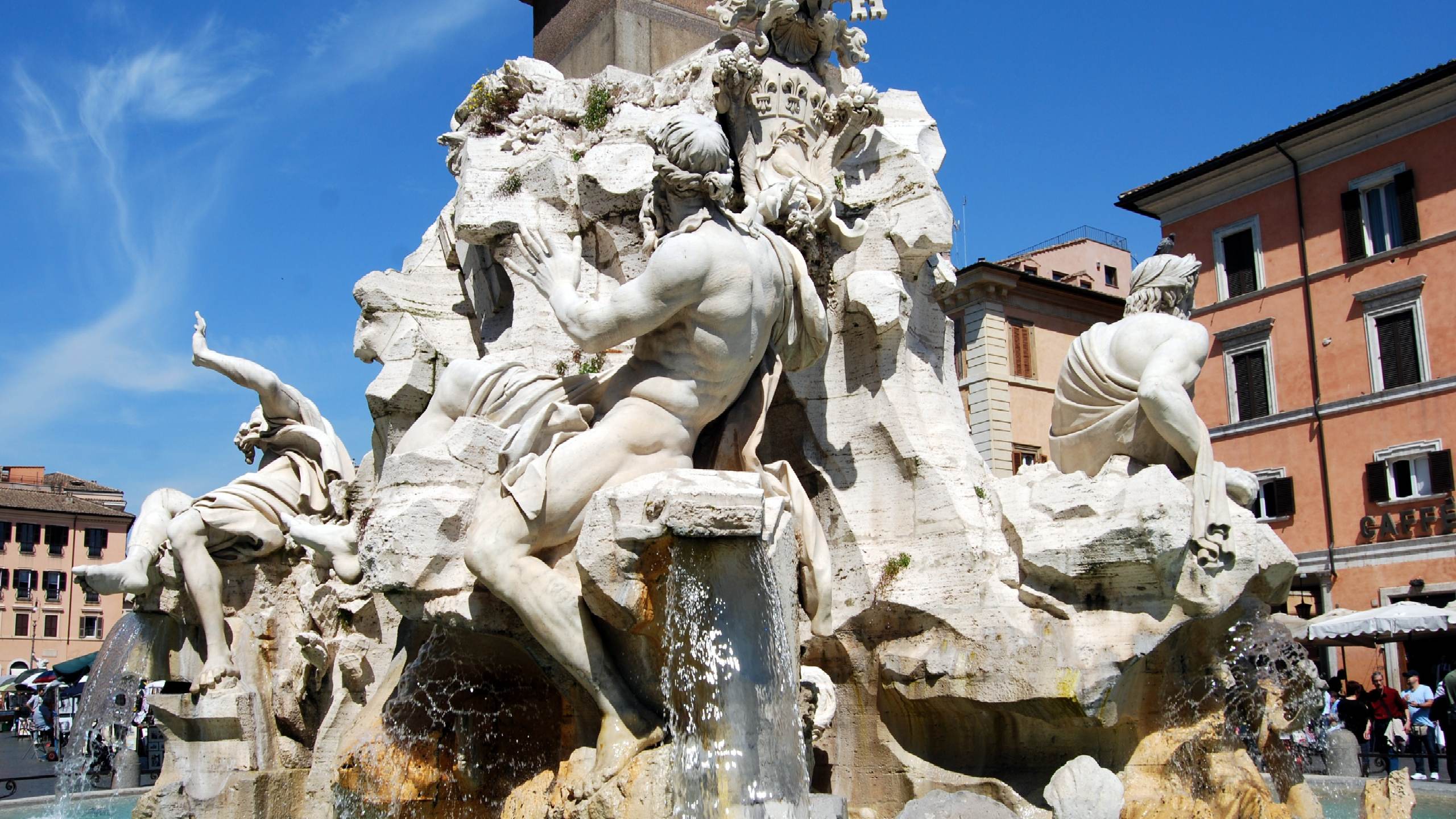 The fountains of Rome

These Roman works must be considered from different points of view, in order to be able to evaluate their beauty; they actually must be admired as urban settings, the fundamental parts of the squares where they are placed.

Among the most deserving fountains you will certainly find:

• The Fontanone del Gianicolo - it is considered one of the most beautiful romantic places in Rome, also due to the presence of this large monumental fountain. There you can admire one of the best views of the city, a spectacular panorama, and enjoy the water games created by the fountain at the same time, a true integral part of the beauty of the area.

• The Bernini Fountain - it is located in one of the most beautiful squares of Rome (Navona) and steals attention from some of the other architectural works around it. Its waters enjoy a reflection of art and culture in the square animated by painters and portraitists; a work of extreme beauty that continues to give value to a square among the most visited in the city.

• The Fountain of the Turtles - usually the favourite animals for the realization of this type of works are dolphins, tritons, sea horses, and majestic aquatic beings. In Rome, however, there is also an unusual fountain dedicated to a definitely nicer animal. That of the turtles is a work located right in the centre of the city, in Piazza Mattei, and dates back to 1500, designed by Giacomo della Porta who wanted to opt for a variation on the theme.

• The Fountain of the Alps - this work is situated in Piazza Barberini and turns out to be a fountain unknown to many people. Built with Carrara marble from Lunense, it was located at the corner of Via Sistina as a symbol of Baroque Roman art; it was commissioned to Bernini and operated for the first time in 1644 through a particular hydrodynamic mechanism.

• The Baboon Fountain - this work stands out among the innumerable fountains of Rome for the horrible statue that was inserted inside. It is said it wanted to reproduce the pagan divinity of Sabina, half man and half goat, but instead it resembles a monkey, reason why people gave it this name.

• The Fountain of the happy water - in its central niche, there is a very large statue of Moses. This fountain characterised by an extreme beauty and artistic value has won the eye and attention of passers-by for years. The work was also created in a historical period during which Rome was trying to work and encourage the construction of aqueducts.

• The Fountain of the Navicella - dating back to the 16th century and located in the centre of the square in front of the Basilica of S. Maria, this fountain was built by Sansovino. Extremely elegant, although certainly not among the best fountains in Rome, this sculpture is definitely worth of a visit.

• The Moor Fountain - an example of the Roman Baroque is a work that presents so many details and details that it is difficult to appreciate them all at once. Located in Piazza Navona, it is immersed in an incredible artistic frame and it still captures the visitor's attention.

• The Fountain of the Tritons - this admirable sculpture stands among the great wonders of the historical centre located in Piazza Bocca della Verità. This beautiful work is surrounded by the Temple of Hercules, the Arch of Janus and the Basilica of Santa Maria, but it still amazes and conquers its space in an enviable artistic landscape.

• The Fountain of the Four Rivers - another masterpiece of Baroque art in Piazza Navona: it certainly is one of the most famous works by Bernini. This fountain goes to link its existence with the history of the city since its construction was the focus of great disputes between two important Roman families. It seems this work actually triggered the rivalry between the two great artists, Bernini and Borromini. The fountain represents the true triumph of Baroque and wonder, as the spectator understands its complexity by the time goes.

• The Big Mask Fountain - certainly a rather unknown work, but a fountain of great value and charm due to its peculiarities; it is located in one of the most peculiar streets of the city, Via Giulia, and it absolutely deserves your attention.

• The Fountain of the Terrina - this is an ancient fountain, with a troubled history and a fairly important artistic presence; you can visit it reaching Piazza della Chiesa Nuova.

• The Fountain of Acqua Paola - it is an exhibition of the famous Acqua Paola aqueduct, located near Porta San Pancrazio. Set in an architectural complex of extreme beauty, this fountain is able to attract the attention of visitors by its simplicity.

• The water clock of the Pincio - this work is placed inside a fountain in Viale dell'Orologio on the Pincio hill, as can be understood by the name. The appearance of the structure recalls the shape of a tree in the forest, and the peculiar functioning allows the water that flows from the fountain to move the pendulum to charge the clock: a certainly unusual and little known work, but for its beauty and particularity it definitely deserves a visit.