Rome and surroundings: a trip to Cerveteri and Tarquinia, following the ancient Etruscans footprints

Certeveteri and Tarquinia are two well-known tourist destinations by the residents of Lazio, less so for tourists from other Italian regions. Together, the two places offer the opportunity to discover the hidden treasures of the necropolis, both in Cerveteri and in Tarquinia, a direct evidence of the Etruscan domination in these territories before the advent of Rome. The closest to the capital is Cerveteri, about 44 km away, Tarquinia instead is 90 km away.
The advice is to visit them during a day-long excursion. A brief guide about the most beautiful things to see first in Cerveteri then in Tarquinia follows. Furthermore, you will be provided with some practical tips for getting to your destination from Rome by car or public transport.

What to see in Cerveteri

The fame of Cerveteri and Tarquinia comes from the Banditaccia necropolis, the most famous of the four in the archaeological site less than 50 km away from the capital. In addition to the Banditaccia, Tarquinia hosts the Etruscan necropolis of San Paolo, Sorbo, Greppe di Sant'Angelo and Monte Abatone. The ruins of the most important necropolis of Cerveteri can boast the title of Unesco World Heritage. In the past, the necropolises were connected to the inhabited centre through the Caere Vetus, better known today as the Via degli Inferi.
If you stay in Cerveteri for a day or just half a day, you will immediately understand that, in addition to the necropolis of Banditaccia, it is a destination that has much more to offer. Don't forget Cerveteri actually is the completion of the union of two fascinating villages, Ceri on one side and Castel del Sasso on the other. The most important historical building is Castello Ruspoli, built in the Middle Ages to defend the raids of the Saracen people. From the late sixties, Castello Ruspoli houses a museum. There, you can see a permanent exhibition dedicated to Etruscan art, every year very popular among visitors. One of the main events attracting a large number of tourists from every corner of Italy is the Sagra del Carciofo. The event takes place during the month of April and shows the typical product par excellence of Cerveteri: the artichoke. 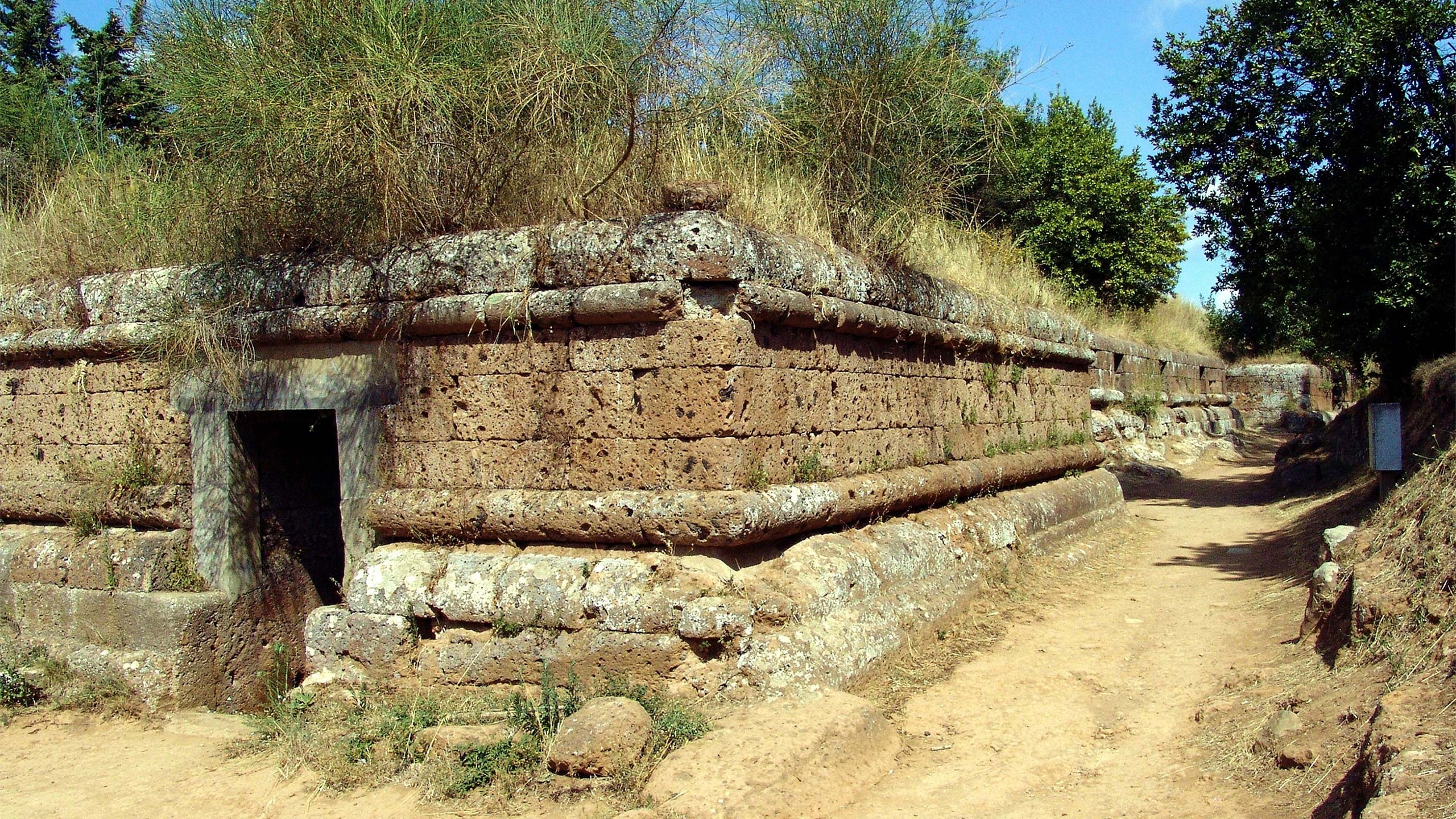 What to see in Tarquinia

About 50 km north of Cerveteri, Tarquinia is the other most interesting tourist destination for those who want to discover the history and the secrets of the Etruscan people. Like Cerveteri, Tarquinia also has its necropolis: that of Monterozzi. The sepulchral area of the ancient Etruscan city houses up to 200 frescoes where the tombs used by the Etruscans more than 2000 years ago are depicted. The most famous frescoes found during the excavations carried out by archaeologists in the past are the Tomba della Caccia, the Cardarelli, the Cacciatore, the Fior di Loto, the Leonesse, the Leopardi and the Guerrieri.
After you have completed the tour of the Monterozzi necropolis, head to the city centre of Tarquinia, where you have the opportunity to visit the Etruscan national museum, reference point in all of Italy for those who want to learn about Etruscan art. The museum complex is housed in the historical Palazzo Vitelleschi, a building built in the first half of the fifteenth century on the precise will of the then Cardinal Vitelleschi (Giovanni). The permanent exhibition of the Etruscan national museum contains sarcophagi, plates, vases, coins and ancient statues. Among them, the most famous is the one depicting the Winged Horses, a work that according to art historians can be dated t3o the 5th century BC, when the Etruscan people lived one of the most important phases of its history. The statue of the Winged Horses was found after more than 2000 years, in 1938. The historical centre of Tarquinia is also very interesting, where the Cathedral of Santa Margherita and the Church of Santa Maria Castello stand out, respectively in Piazza del Duomo and in Via Porta di Castello.

How to get to Cerveteri from Rome

The distance from Rome to Cerveteri is about 40 km. If you are driving from the capital, follow the road signs towards Via Aurelia, then enter the E80 and take the Cerveteri exit. The journey by car takes about 50 minutes. You can also reach Cerveteri by train. The railway station is Marina di Cerveteri, connected to Roma Termini station by Trenitalia trains, directed to the cities of Grosseto, Civitavecchia and Pisa. Once you get off at the Marina di Cerveteri station, wait for the D Rossi Bus line, the local company that manages local public transport.
As reported by the official website of the Municipality, on Sunday the stop at the Necropolis of Banditaccia is guaranteed only in the morning. Remember to inform the driver of the means of transport you want to reach the necropolis of Cerveteri. On Sundays, there are 3 daily rides (the first at 7.20am, the last at 12.20pm).

How to get to Tarquinia from Rome

The reference road is the E80. From the exit of Rome, follow the signs towards Civitavecchia/Viterbo and always drive along the E80 until the exit of Tarquinia. The journey by car from the capital is just over an hour (in normal traffic conditions), for a total distance of 90 km. If you do not have a car available, you can also reach Tarquinia and its necropolis thanks to public transportation such as by train and bus.
The reference railway section is the Rome-Ventimiglia. After you arrive at Tarquinia train station, you can easily reach the town centre thanks to the city bus by the Eusepi company. Moreover, from the train station, you can also take advantage of the free shuttle service that leads up to the Etruscan necropolis. So you have an intuitive and free solution to reach what is the main attraction of Tarquinia.