Fettuccine with chicken giblet sauce is an old recipe of Roman cuisine now not very common, even if it is still possible to find it in some restaurants in the Capital. It is a really unusual type of pasta, with a very special taste from the poor local cuisine. The term "rigaglie" or "regaglie" - that is giblets - comes from the Latin word "regalia". In addition to the literal meaning of something worth of a king, it means a royal gift. The word "rigaglie" indicates the offal (unborn eggs, heart, liver, crest, stomach, gizzard and wattles) of the birds, in particular chickens or pigeons. In the past, weather lords and nobles used to eat the flesh of the birds, the offal and the left-overs were for the servants.
At the same time, the waste the workers of the butchers used to bring home were used by Roman housewives to create this dish. Furthermore, according to some evidences the chicken giblets was a recipe widely used in prisons. The municipal slaughterhouses were actually located near the prisons: it seems that in the past there was no space for the offal of the slaughtered animals did not have space in the market and so they were thrown into the ditches. The prisoners, to avoid what they considered a waste, asked and obtained permission from the authorities to receive the giblets discarded by the slaughterhouses. In this way, they invented a soup based on giblets, water and dry bread. Just like most of the recipes of the poor food of lower classes, nowadays the chicken giblet sauce has become a famous food.

The Fettuccine with chicken giblets: the recipe

The Fettuccine with chicken giblets are a cheap and very tasty first course. The ingredients used give the pasta a very intense flavour, so the chicken offal is a dish people not always love. It is very appreciated by those who want rustic, tasty, nutritious and strong flavours. It is a typical Roman recipe and it is possible to find it both in the original version or flavoured with white wine, sage or with the addition of egg yolk beaten with lemon juice. The most successful moment of this recipe was the Sixties, when it was mentioned in the film Totò, Fabrizi giovani d'oggi.
During the restaurant scene, the actor Aldo Fabrizi, also a great kitchen expert, ordered Fettuccine, butter, chicken sauce and giblets. The recipe of Fettuccine with chicken giblets is very easy, however it is good to keep in mind that offal dishes require rather high cooking times, about 40-50 minutes. However, you can cook giblets with just a little bit of butter and extra virgin olive oil. To make the sauce more aromatic, we recommend you to add a few marjoram leaves. Only just before the end of the cooking period, add the tomato sauce to the meat. Secondly, it is good to remember you can prepare the Fettuccine directly at home or buy them ready-made. In any case, pasta must be drained "al dente", to feel a cream in your mouth. 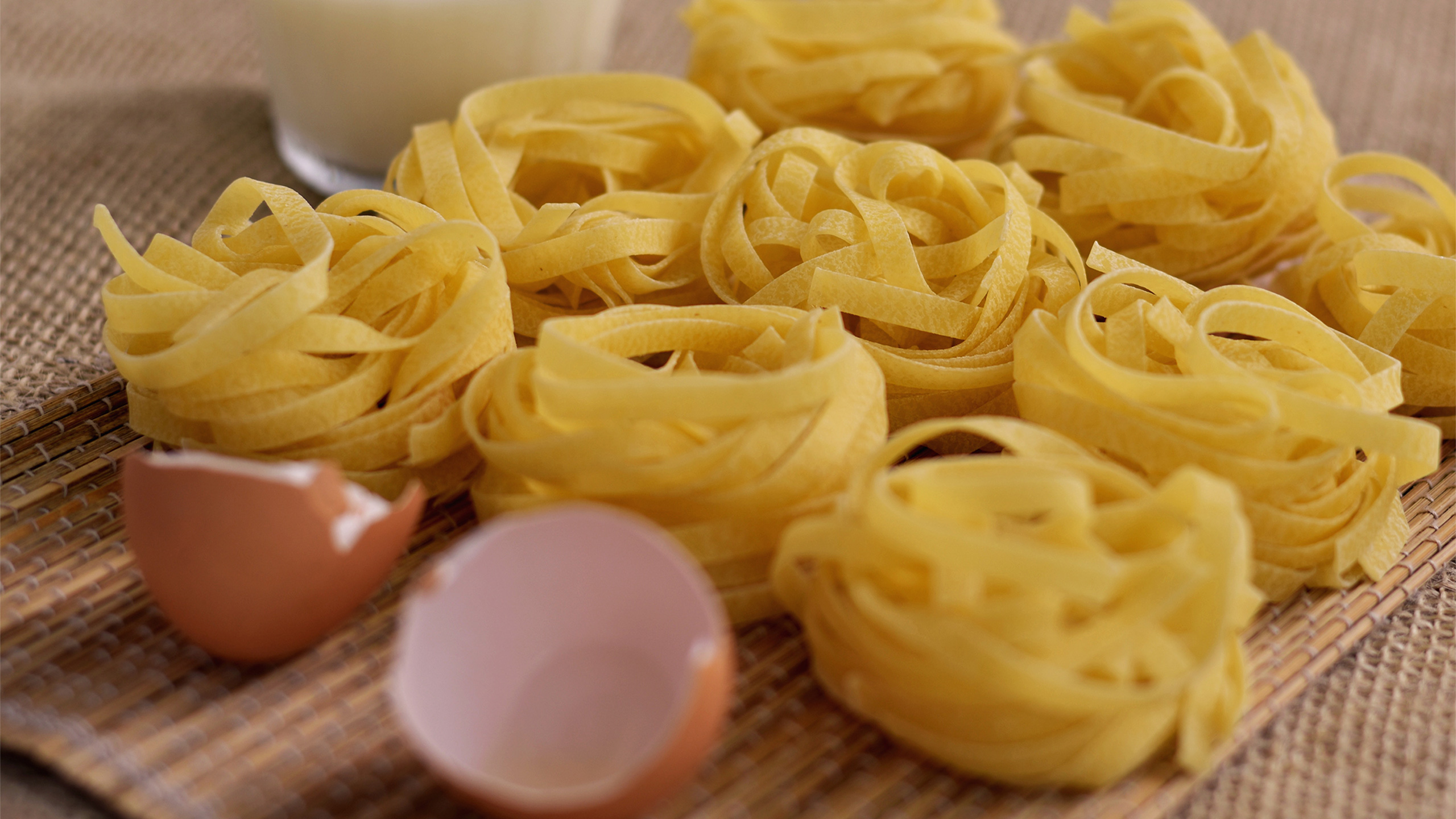 How to prepare Fettuccine with chicken giblets

If you want to prepare Fettuccine at home, and you want to have enough pasta for 4 people, you need 600 grams of flour, 6 eggs and a bit of salt. At this point put all the ingredients inside a sufficiently large bowl and work them with a spoon or with a whisk to create a smooth and homogeneous mixture. The last phase of processing must take place using the hands. Then let the dough rest for 30 minutes. Subsequently, the dough must be rolled out with a rolling pin until it gets very low, about half a centimetre thick. At this point, use a knife or a special kitchen tool to cut the dough into stripes about 1 centimetre wide. Alternatively, you can buy ready-made Fettuccine; in this case buy about 400-420 grams of them. For the preparation of the sauce with chicken giblets, instead, it takes:
- 500 grams of chicken giblets ( for an easier cleaning and preparation process we suggest you to buy chicken livers and "durelli");
- 30 grams of dried mushrooms;
- 1 tablespoon of vinegar;
- 1 clove of garlic;
- 60 grams of fat of ham or lard;
- 1 glass of meat broth;
- a bit of parsley;
- an onion;
- 4 tablespoons of extra virgin olive oil;
- some grated Pecorino romano;
- 800 grams of peeled tomatoes;
- 1/2 glass of white wine;
- a carrot;
- 1/2 celery stalk;
- pepper and salt to taste;
- a bay leaf or some marjoram leaves.

Firstly, you need to carefully clean chicken giblets . It is fundamental you eliminate the bladder in the liver, being very careful not to break it. Otherwise, the meat takes a very bitter taste. At this point, rinse the meat and cut it into small pieces using a knife. It is a fairly long and boring procedure, but it is essential not to use the mixer, as it frays the meat.
At this point, boil the giblets for at least 30 minutes. Meanwhile, chop the vegetables (onion, celery, shallots, parsley and carrot) to prepare a sauté. Brown the ground for a few minutes with oil and lard in a low heat pan. Pay attention not to burn the vegetables, especially the onion. Then add the offal, the white wine and, after evaporated, tomatoes, salt, pepper and marjoram. Cook for about 20 minutes (covered) on low heat and, if necessary, add a little broth. Cook the Fettuccine in abundant salted water and add to the sauce after draining them "al dente". Then stir in and serve with a sprinkling of Pecorino.