If it is true "Rome was not built in a day", the same is true to discover its countless beauties: the Colosseum, the Altare della Patria, the Pantheon, in addition to the squares guarding priceless works of art. Imperial Rome, for example, still breathes very strong in the streets of the city and in those sites that will allow you to make, by a slight effort of imagination, a jump into the opulent times of the great Rome. Among the most visited archaeological sites in the city, there certainly are the Mercati di Traiano, in the heart of the city and at the edge of the Vittoriano, the Campidoglio and the Palatine Hill, a true cradle of Rome.

What were Trajan's Markets?

The Markets of Trajan were born at the same time as the opposite eponymous forum, from which they are separated by a paved road: it was the emperor himself who wanted its construction, then entrusted to the architect Apollodorus of Damascus, ended in 112 and 113 AD. What you see today is an imposing six-story structure built in brick and red bricks that you have noticed so much on the monuments linked to ancient Rome scattered around the city: it stands in tiers, following the inclinations of the Quirinal Hill, at the foot of which it was built.
The presence within more than 150 clubs will make you think it is the first commercial centre in history: it actually was it, as the presence of the tabernae with a lot of back shops, moreover difficult to reach from the goods carts. Precisely because of this consideration, it is now certain the Markets of Trajan were essentially a real multi-purpose centre, rich above all in archives and offices, where the city was administered, in order to preserve its size and efficiency.

The lower part of the Markets: the Great Hemicycle

To visit the Markets of Trajan, you have to enter the area from Via IV Novembre, from where the ancient Romans reached the markets: know that the brick structure of the markets was the same and therefore not covered by elegant marbles, as instead the forum was: Trajan, the first emperor from the province, actually wanted to emphasize the austerity of the place where the commercial affairs of the city were administered, unlike the monumental Imperial Forums.
The most iconic part of the markets certainly is the Great Hemicycle: look down at the tabernae with the square caverns of the doors with architraves and travertine jambs, and up to the windows framed by pillars. On the sides of the Great Hemicycle, two rooms open before your eyes, once dominated by semi-domes.
The Great Hemicycle is dominated by the marvelous Via Biberatica, from the Latin biber (drink ) - those drunk in Rome are the same we do even today, ie wine and beer, even if in different ways): walking along this ancient paved street, with the tabernae on the sides, it will seem that time has never passed. The street has been perfectly preserved, almost intact and it seems a cart could suddenly pass in front of you. 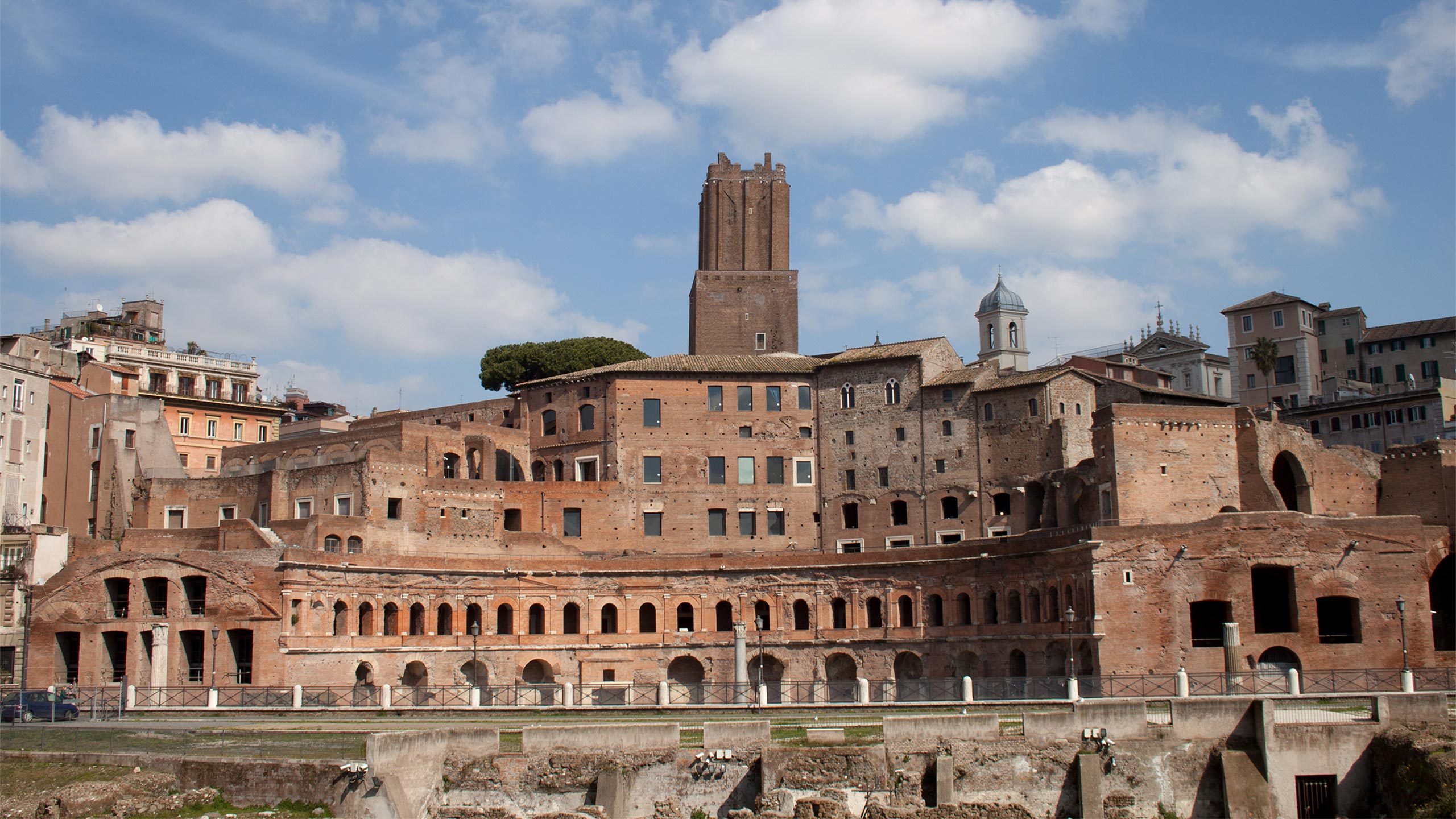 The Via Biberatica and the Great Hall

The Via Biberatica connects the lower part of the markets of Trajan to the upper one, made up of the Central Corps, rich in tabernae and offices, including secret caverns built to guarantee the safety of the senators who frequented the markets: it also seems the Fori Divi Traiani prosecutor worked there, as shown by an inscription found during the excavations, in 1926 and 1934.
The Great Hall is the heart of the Markets of Trajan and you can reach it just going along the abovementioned paved road, climbing a few steps. The first thing that will strike you about this large atrium extended on two levels and dominated by six colossal cross vaults, will be a portion of the attic partly supported by a splendid caryatid alternating with a shield depicting a bearded deity in the centre, placed in the middle of the hall: it comes from the portico of the Forum of Augustus as the remains of the Dacian statues belonged to the Forum of Trajan. Looking up at the second level of the Great Hall, you will notice an open corridor, all around the room and with other rooms: walking along it, you will find yourself in the before-mentioned Central Building, also on two floors and where you can visit the beautiful courtyard surrounded by recesses hosting statues.

The Museum of the Fori Imperiali

During your visit to the Markets of Trajan, you cannot miss the Imperial Forums. Despite their beauty, only vestiges remain, but if you want to get an idea of what the Forums were originally like, then don't miss to visit the Museum of the Imperial Forums, inaugurated in 2007. To the more than 40,000 reminds of the forensic area, multimedia illustrative panels, videos and educational activities make you discover one of the wonders not only of the eternal city but of the whole world.
The exhibition rooms open on the sides of the Great Hall and in the two rooms that surround the Great Hemicycle: you will find yourself in environments rich in frames, capitals and friezes, some depicting griffons, other cupids, sphinxes or Victories. The Sala del Colosso is very beautiful, a video will show you how the monumental statue dedicated to Augustus probably was, and then the statues of the Dacians, defeated by Trajan in the II century AD. If you reach the very near Trajan's Forum, you can admire the celebration of victory over the Dacians, engraved in a low-relief that, like a spiral, decorates the Trajan Coloumn in the forum with the same name: you may not know it, but inside there is a spiral staircase that leads to the top of the column, where today a statue of St. Peter stands.
Returning to the Museo dei Fori Imperiali, don't forget to visit one of the most fascinating places in the exhibition area, namely the seventeenth-century cistern used by the Convent of Santa Caterina.
The environment where will find yourselves is suggestively illuminated by the light coming from the wells on the top. All around, there are about 128 amphorae where, with a little attention, you will still notice the inscriptions and stamps dating back to tens of centuries ago.