Art in Rome: the Colosseum, once arena of gladiators now tourist attraction, always in step with the times

The Colosseum is one of the symbolic places not only of Rome but of whole Italy. It is the best preserved amphitheater in the world, which manages to convey its charm century after century to anyone who visits it, regardless of age. The Colosseum has lived many lives and has been a spectator of numerous stories, here are all its secrets.

The history of the Colosseum

The Colosseum was formerly called Amphitheatrum Flavium and was designed as an arena of shows to contain a number of spectators between 50 thousand and 75 thousand. Its construction was commissioned by Vespasian in 72 and the amphitheater was inaugurated 8 years later, under the reign of Tito. It originally had a height of 52 metres for an internal surface of over 3300 square metres. Its layout and exterior architecture are clearly inspired by the imperial style that was very popular in that century. It is a small masterpiece of architecture as its arched structure is based on a complex system of architraves that is truly innovative for its time. Its construction was designed to create a place to offer public shows at the expense of the state and entertain the population. Precisely for this reason, its dimensions were so imposing that it was called the Colosseum,in the Middle Ages, as it meant "colossal", referring to its grandeur. Over the centuries the epithet completely replaced the proper name of the Flavian amphitheater today known just like the Colosseum. Below the arena of fighting, a complex system of corridors and rooms was built to house the protagonists of the shows. In the Colosseum, the gladiators performed for the fight matches but also re-enactments of historical battles or simulations of incredible hunts were staged. Recent studies have shown instead the Colosseum has never been scene of mass killings of Christians, torn to pieces by lions, at the time of Nero and Caligula: the legend is totally without historical foundation.

The Colosseum, the arena of gladiators

The Flavian amphitheater was inaugurated in 80 AD at the behest of Emperor Titus who wanted to celebrate the anniversary by a hundred days of games. There were many and different shows that month after month found place in the billboard of the Colosseum but surely the most loved were those that foresaw the presence of gladiators. These events were held once a month and the people could participate for free because the ruling class of the empire considered it almost an obligation to distract the population and organize their free time with combat shows. The gladiators, then, became real stars of the time and many of them achieved fame and freedom by gaining show after show. The gladiators - whose name derives from the word "gladio" that distinguished the small sword they used - were divided into two categories: there were those professionals who fought for work and money and there were those condemned to death who could hope for a grace if they were able to defeat the opponent in the arena. Just on the arena, there were no distinctions of sex and race because anyone could become a famous gladiator: it was enough to kill the contender - human or animal that he was - to gain the favors of the people and above all of the emperor, true balance needle for decide on the life or death of gladiators. The shows with female gladiators as protagonist were very popular, they had nothing to envy to the ferocity of men. 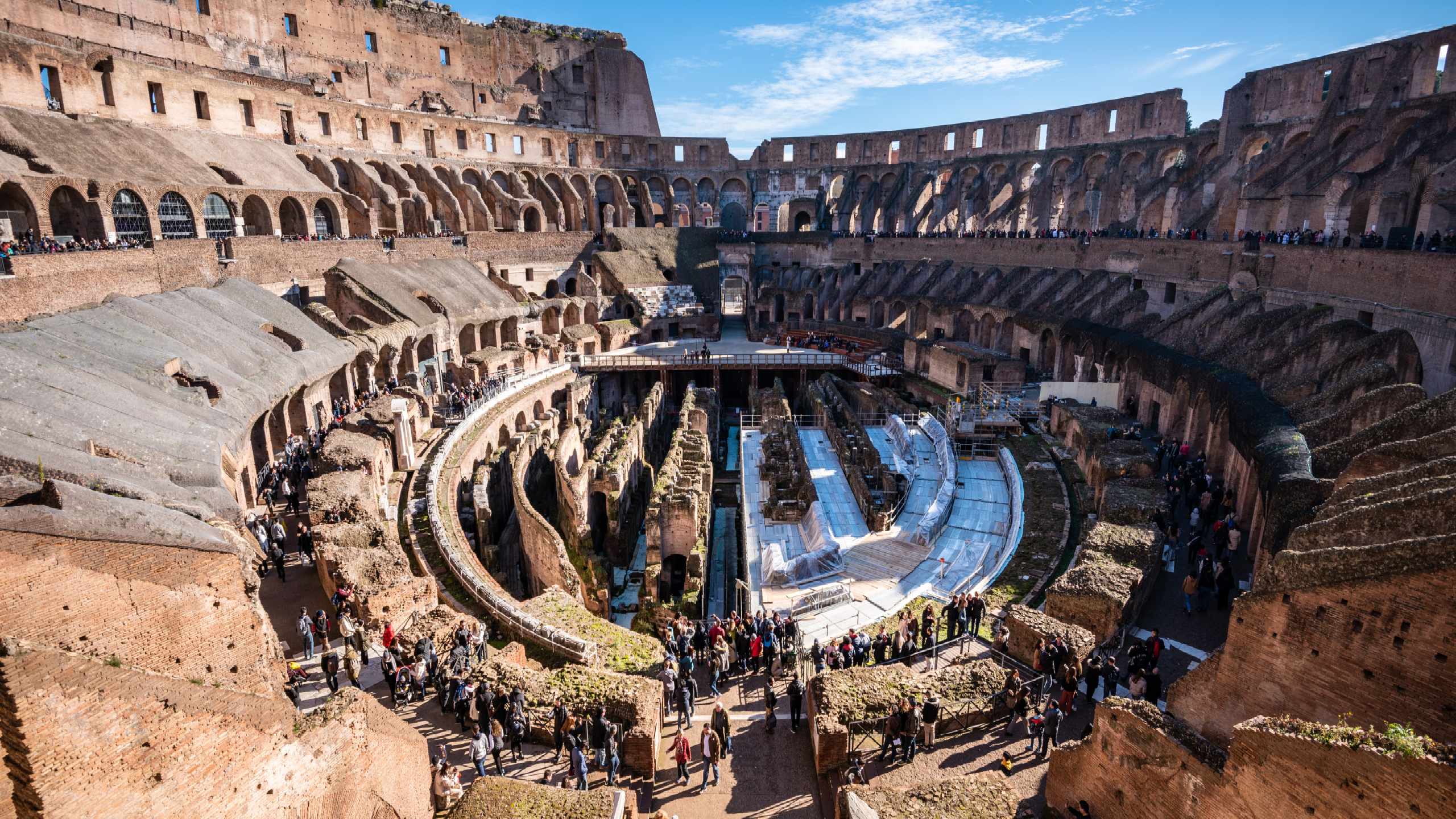 Centuries have gone, but even today, the Colosseum always is a destination for millions of tourists every year visiting it navigating into the imperial era, when Rome was mistress of the world, at the top of its glory. The Colosseum has currently become a tourist attraction - considered one of the seven wonders of the world - and it can be visited with or without a guide to discover all its secrets. Every day only 3,000 visits are allowed inside the Colosseum. The entrance ticket costs € 12 for adults who must add € 2 to the booking fee if they buy the ticket online. The reduced ticket, on the other hand, can be purchased for € 7.50. You can get the entrance ticket to the Colosseum in small groups organized with a guide, for 16€. Large groups can obtain discounts varying according to the number of participants. In this way, it will be possible to discover all the secrets of the Flavian Amphitheater with a prepared and authorized guide who will not only make you discover all the architectural aspects of the structure, but they will also tell all the background and stories that took place in the most famous arena in the world. For those who want to make a cheap visit of the Colosseum, it should be noted that on the first Sunday of the month admission is always free, but you risk of finding long queues, so it is advisable to reach the Flavio amphitheater very soon so as not to stay out by the three thousand lucky ones who will be able to make a real dive into history for a whole day.

Where to stay in Rome to admire the Colosseum

The complete visit of the Colosseum will take away an entire day. It would therefore be ideal to include it in a longer stay in the capital to discover all the other beauties of the city. A comfortable facility to stay in Rome can certainly be the Colosseum Hotel, located in the heart of the Monti district, a stone's throw from the Colosseum and in the heart of the historical centre. It is a charming dwelling where the comfort of a structure that makes its guests' well-being its main goal is added to the typically Italian warm welcome. Having as base the Hotel Colosseum it will be really very simple to succeed in organizing the days around Rome to the discovery of its history and of the traces of a glorious past that still hovers in the air. The hotel is the ideal place to host tourists or for business stays, so as to take advantage of the free time available between one meeting and another for a visit to the Colosseum and other city monuments. From the terrace of the Hotel Colosseum, then, you can enjoy a beautiful view not only of the Flavian amphitheater itself but also of the entire historical centre of the city and can be the ideal place to relax and sip an aperitif while admiring the wonderful Capitoline sunset.