Art in Rome: myths and philosophy in the fresco Triumph of Galatea by Raffaello, in Villa Farnesina

The Triumph of Galatea in Villa Farnesina

In the early 1500s, the architect Baldassarre Peruzzi created, by Agostino Chigi, one of the most beautiful residences in Rome, known as Villa Farnesina. Among the many frescoes used to decorate the building we find the "Triumph of Galatea" by Raffaello Sanzio who was asked to create a work depicting the nymph. The initial project foresaw that Sanzio would decorate an entire room with its walls but today only the culminating moment of the nymph has remained. The project, which engaged Raffaello for about three years, is an attempt to merge mythology, religion and philosophy into Renaissance art to which it is inspired in the theme of the celebration and victory of love. The fresco was painted in 13 days and it is the work of a single artist, despite the hypotheses of Cavalcaselle and Camesasca who considered the master's intervention only in the realization of the upper part of the painting possible.

Structure and features of the framework

The work is inspired by the texts of Ovid, Apuleius, Politian and Theocritus. The scene takes place at the sea, and it depicts Galatea, the only character standing, behind whom we find a blonde Nereid on a marine centaur, and on either side two players are painted, one of whom is a merman. In the picture, it is possible to see the nymph grabbing a fish of very strange shape grabbing two dolphins itself. The young Palaemon is depicted under Galatea. Galatea is portrayed with an attitude and appearance very similar to Saint Catherine of Alexandria shown on a painting accepted by the National Gallery in London. The painting shows the Saint lying on a shell pulled by dolphins led by the young Palaemon, and a child holding a series of arrows ready to be thrown in the sky. The scene of the Triumph of Galatea is in perfect harmony with the residence, for colours and proportions. The shades stand out for their brightness and for the red colour of the garments of the nymph Galatea that stands out when compared to the other colours used for the clothes of the other characters.
The swirling rhythm of the composition and the arrangement in the centre of the young woman are very reminiscent of the typical canons of classicism, defined "as the ancient way" by Raffaello. According to the Greek tradition, Galatea means "the one who has white skin, like milk" and it is one of the 50 mythological figures that, according to legend, used to protect sailors from the danger of ocean waters. Some myths tell how the nymph was in love with the young Acis, but that the Cyclops Polyphemus, who used the sound of the flute to draw her to him, also fell in love with her. Failing to make her fall in love with him, Polyphemus decided to launch a stone towards the young Acis who died under its weight. According to the story of Ovid's Metamorphoses, the great heart of Galatea shows itself when she decides to turn the young man's blood into a spring. The story of the young nymph and Polyphemus is a very dear topic for the Farnese family, so much so they asked Annibale Carracci to paint the vault of the residence depicting first Polyphemus playing for Galatea, and then Polyphemus launching the stone towards the young Acis. 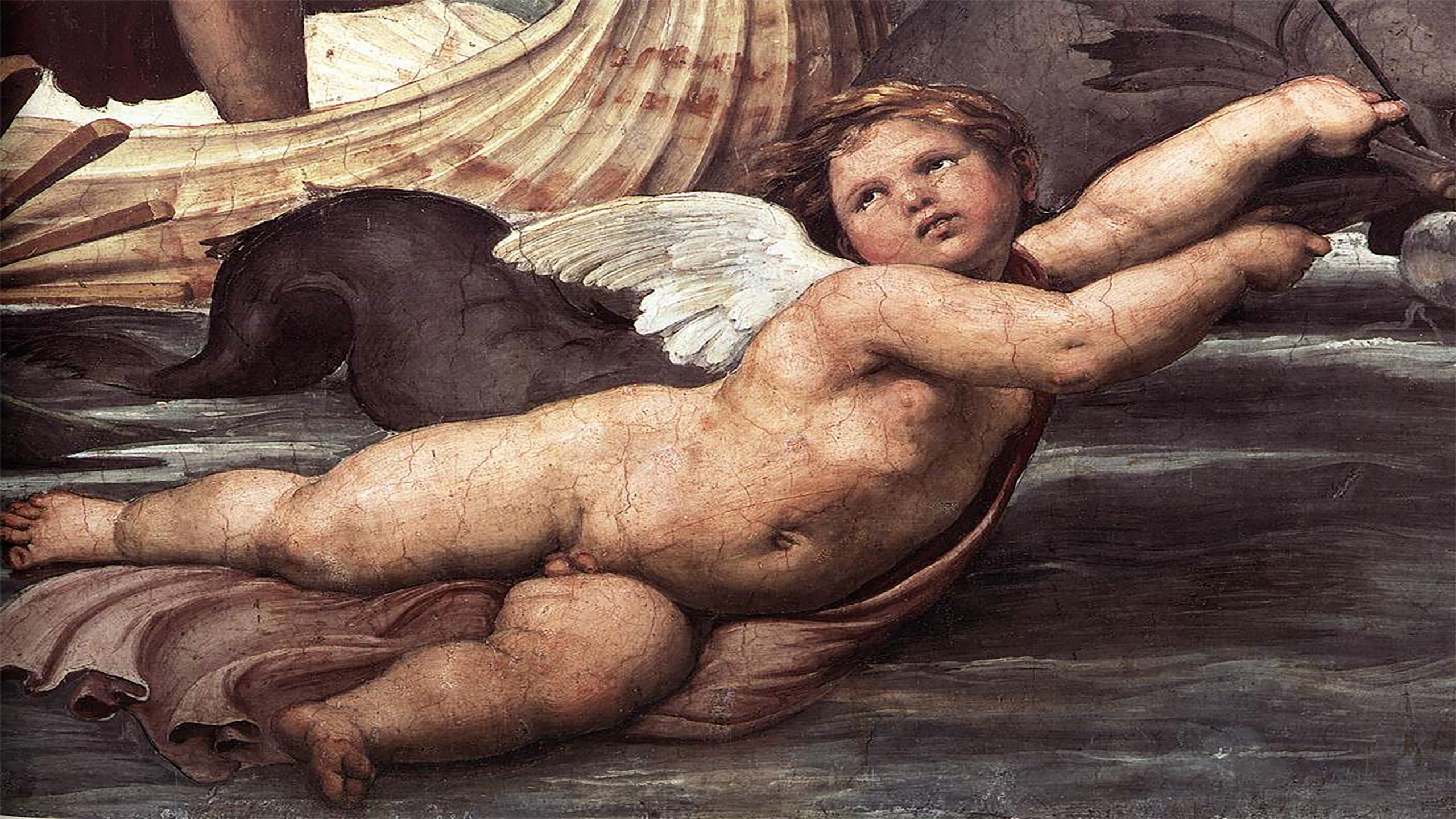 Myth and meaning of the picture

The painting by Raffaello is rich in allegorical meanings that enhance the figure of the young nymph Galatea and recalling the various is protagonist. The Triumph the title refers to is true love, the one Galatea feels for Acis, opposed to the love Polyphemus felt: a love that imposes itself. It is so evident how the armed cupids around the nymph, especially the one Galatea's gazing at, keeps his arrows hidden behind a cloud, are a reference to love not merely realized in physical desire but rather in a soul drive. It is important to observe how in the foreground, among the armed Cupids, the God of love is attracting the observer's gaze towards the dolphins (two of them, as told by Politian and not four as instead described by Philostratus). The meaning of the relationship between the two protagonists Polyphemus and Galatea, from which Raffaello took inspiration for a fundamental theme such as pure love, is developed in other two figures painted in the picture: the dolphin and the octopus.
The representation of these two figures is quite unusual since they are not natural enemies and the polyp is not the main food source for dolphins. The meaning of this meeting is clarified by the Halieutica by Oppian, stating that the two animals are the opposite of each other in the context of marine fauna. The dolphin is the lord of the sea and these animals hunt is considered immoral, whereas polyps are described as very smart, often cruel. The figure of the dolphin, also developed in the work "Apollo and Delphi", was common in Greek mythology and it was considered a symbol of a noble soul, taking care of their children as also Christ and Poseidon (god of the sea) do, both depicted with the symbol of the dolphin. This first figure is in contrast with the polyp, whose mating is almost mortal. This animal with eight tentacles, each one with two powerful suckers, is able to drag even the largest fish into the depths of the sea and it so becomes a symbol of a possessive love imposing itself on the will of the beloved. The interesting detail of the dolphin that kills the octopus in Raffaello's work is a metaphorical reflection about Galatea's rejection of Polyphemus’ requests.

Legend tells Michelangelo wanted to see how the work was proceeding, but since Raffaello did not allow anyone to see the frescoes, he decided to avoid surveillance of the keepers by disguising himself as a seller and entering the residence during the work break. Once inside the building, he finally succeeded in admiring the work of his rival but not being able to resist the temptation he took a piece of charcoal and drew a giant head; when Raffaello came back, despite angry, he did not have the courage to erase it, on the contrary, he ordered nobody removed it.